to veteran and active duty charities since 2015.

We created the Patriots Charity Initiative from our belief that one day a year is not enough to thank our veterans and active duty service members for defending the freedoms we enjoy every single day. BBMC Mortgage makes a $125 donation for each qualifying loan that we close. We expect our annual donations to reach nearly $1 million dollars. We know that the charities that we’ve partnered with will put that money to good use in our veteran and active duty military communities. We are committed to serving those who are or have served, and this program allows us to express our gratitude in a very tangible and meaningful way each and every day. We are proud that giving back to our veterans and active duty service members is engrained in the fiber of BBMC Mortgage.

BBMC MORTGAGE WILL DONATE $125 TO ONE OF THE FOLLOWING VETERAN AND ACTIVE DUTY CHARITIES FOR EVERY PARTICIPATING LOAN THAT WE CLOSE.

The USO strengthens America’s military service members by keeping them connected to family, home and country, throughout their service to the nation.

U.S. Army Veteran Fred G. Nuesslein wasn’t expecting all the bells and whistles during his recent trip to Washington D.C., but Nuesslein got them anyway thanks to The Stars and Stripes Honor Flight.

Nuesslein, 87, was taken on a one day, all-expenses paid trip to see the memorials and monuments in our nation’s capitol. Nuesslein served in Stuttgart, Germany, from 1951 to 1953 and experienced a full day of honor and gratitude for his service.

“My dad called it the most significant event of his entire life,” said his son, James Nuesslein, BBMC’s vice president of mortgage lending. “The outpouring of gratitude and respect these vets are given is something they could never have imagined.”

The Stars and Stripes Honor Flight brings World War II vets, Korean War vets and terminally ill veterans to the nation’s capitol free of charge. No expense is spared as a police motorcade escorts the veterans to and from the airport and monument to monument.

“I doubt the vets expected jet flyovers or being saluted by nearly everyone they met,” James Nuesslein said. “A mother with a young family asked if she could take a picture of my dad with her kids. He still can’t get over that.”

To cap it off, a parade with more than 500 people greeted and cheered for the vets as they returned to the airport.

“My daughters and I could barely find a spot at the terminal to squeeze in,” James Nuesslein said. “It’s something indescribable. I know my dad is incredibly grateful to Stars and Stripes for being part of this once-in-a-lifetime opportunity.” 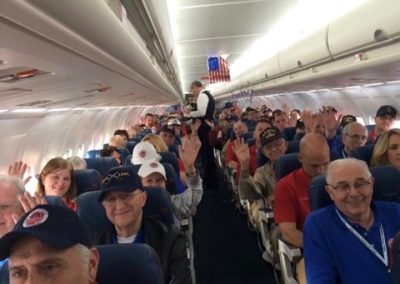 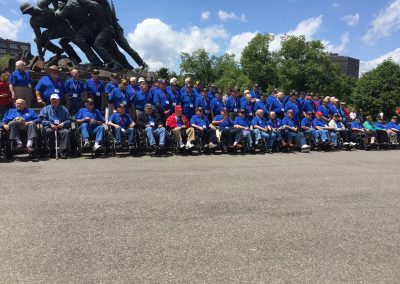 A National Anthem Performance by Jim of the Chicago Blackhawks

BBMC Mortgage Interviews CEO of the USO of Illinois

Ready to Buy or refinance?

It only takes a 4 minute call to find out if you qualify.